As discussed in previous posts, community calls, and in Discord, Hop could benefit from additional liquidity in the bridge AMMs. Increased liquidity may attract larger transfers and allow arbitrageurs to maintain tighter spreads improving bridge rates for all users. Providing HOP incentives for Hop LPs has the potential to increase AMM liquidity significantly.

In addition, Bonder returns have been low or have required a high bonder fee percentage to maintain adequate returns. A multitude of recent bridge hacks have also raised the risk profile of bridges in general despite Hop’s strong track record of security. As a result, bonders will need additional incentives if Hop DAO wishes to keep bonder fees low and keep bonders interested until a decentralized bonder network is achieved.

important to note the removal of the DAI incentives further to this discuss re collaboration with Maker vis-a-vis their Teleport bridge: Discussion: Maker Teleport - #3 by david-mihal.

important to note the removal of the DAI incentives further to this discuss re collaboration with Maker vis-a-vis their Teleport bridge: Discussion: Maker Teleport - #3 by david-mihal.

Yes, thanks for flagging this. If Maker is keen on the Hop DAI bridge continuing to operate even after Teleport is deployed, maybe it does have long-term prospects and is worth incentivizing until Maker can inject liquidity with a D3M. Sounds like it would take ~6 to 9 months as @hexonaut mentioned here.

We would also have to build a Hop D3M, so even optimistically we are at least 6-9 months out.

important to note the removal of the DAI incentives further to this discuss re collaboration with Maker vis-a-vis their Teleport bridge: Discussion: Maker Teleport - #3 by david-mihal .

As pointed out, it seems it’s still early to say whether an DAI bonder is still required or not. If it is, I would suggest DAI get’s added to the list again (as it was in this post).

Also, allocation resembles volume stats which makes me think there is an opportunity to also consider this following post as well, and have a weighted average (TBD what the golden ration would be, but we could iterate starting with a 70-30):

Instead, we should think of these subsidies as a way to accelerate growth across all of Hop’s markets (especially new ones) and support the markets that are not yet self-sufficient.

In favour of measuring the impact of incentives one liquidity providing. It may be hard though to drive insights, as context is very dynamic and impactful (“is there a bear sentiment ruling the market”, “are there new USDC regulations”, “another bridge got hacked last week”, what have you). Not to say metrics are not needed, but rather to size expectations on having definitive results.

There is currently 20,000,000 HOP sitting in a community multi-sig waiting for deployment. That would be 10 months toward this proposal, all things being equal.

Curious to know what the method was to get to those percentage? I presume its current volume?

I think a metric to watch closely is the ratio of TVL to volume cleared of a given asset on a given network. The lower this ratio the more likely the lack of TVL in that asset is a drag on volume.

Also as discussed on the community call i think it’s important to keep a tight control on the distribution of rewards. Maybe we could systematically upgrade these percentage on a monthly or quarterly basis according to the rule that defines these percentages (for example the ratio mentioned above among others).

It’s important that the hop rewards get allocated effectively, that is to minimize the subsidies allocated to liquidity that has lower marginal effect on volume.

Curious to know what the method was to get to those percentage? I presume its current volume?

Yes, it was primarily driven by the relative volume of each network and then minor adjustments were made for things like TVL, growth, and any partner rewards provided by the network.

I think it’s a good idea to keep tight controls on the distribution like you are saying. Coming up with a set rule can be a bit difficult in practice and get a little messy with outside incentives at play as well.

It was touched on on the community call but what if this proposal is set up to be adjusted within some bounds through an expedited governance process that only involves a snapshot vote? No request for comment period or on-chain vote would be needed as long as the adjustment is within the bounds of the original accepted proposal. This would make it pretty easy to make monthly adjustments and two competing adjustments could simply be put to vote.

Adjustments to the ETH, USDC, USDT, and DAI LP and bonder rewards can be made through an expedited governance process requiring only a snapshot vote and not requiring a request for comment period or on-chain vote. Adjustments that introduce new tokens, new incentivized networks, or exceed 5,000,000 HOP per month are required to go through the full Hop governance process.

Very grateful that bonders were added to the rewards program in the updated proposal!!! I run the USDT bonder and programs like this help ensure we have sufficient liquidity to continue providing the service for Hop.

I suggest making the rewards program retroactive from TGE for all of the bonders. The bonders are essentially locked-up liquidity providers, unlike AMM LPs who are able to move in / out of pools as they want. Given this, it should be pretty straightforward to make the program retroactive. Here’s my recommendation: 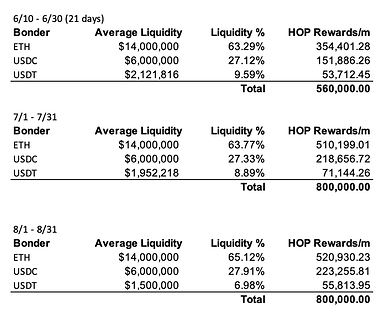 Note: the USDT bonder has been operating since January with a little over $2M of liquidity. We had some LPs ask to withdraw their liquidity in July, and rather than replacing those funds we decided to reduce the bonder size to $1.5M. USDT has very low volumes, so it made sense to lower the liquidity minimum to $1.5M so we don’t have a lot of dead capital.

We’ve continued to provide liquidity to Hop post-TGE even though there wasn’t an incentive program in place. Making the bonder rewards retroactive to TGE will cost the treasury an additional 1,360,000 HOP, which seems like a cheap and easy way to show long-term alignment with bonders. Even though bonders aren’t directly driving volumes, we play an essential role in the network and having bonders who are committed to Hop long-term lets the Hop community focus on higher impact initiatives.

Also, I will be abstaining from voting on any proposals related to bonder rewards as long as I continue to operate the USDT bonder.

HOP Rewards for DAI have now been added to this proposal. @Sisyhpos @hexonaut @Nadia

Distributing retroactive bonder rewards sounds reasonable assuming the distribution is adjusted to include the DAI bonder and to account for fluctuations in the ETH price for those months. The bonder rewards have been low across the board since TGE and the bonders have all kept bonder fees low for the benefit of Hop despite sub-par returns.

Would love to hear others’ thoughts as well.

Seems fair since they have been pivotal for the advancement of Hop and agree on adjusting rewards to account for ETH fluctuations. I believe it’s important to continue to align bonders and Hop in order to achieve self-sustaining growth where bonder fees provide attractive risk-adjusted returns, which is currently not the case.

Can anyone share some more specific numbers on what organic bonder APYs have been for each asset since TGE?

I’d rather see a focus on making lping and bonding worthwhile in the FUTURE than focusing on the PAST. For that we already had the token genesis airdrop.

The reason asked for retroactive bonder rewards is because bonders are locking up their capital. And though we were rewarded for locking up tokens prior to TGE through the airdrop, there has been no reward since TGE for keeping those tokens locked.

The current proposal is for ongoing rewards. I think it’s fair to reward bonders for keeping liquidity locked up through this current time frame (and in most cases like us, for opportunistically adding liquidity when needed during that time).

I calculate our bonder has returned roughly 5% APR if we assume avg liquidity of $1.75M. Our bonder has been at $2M since we launched, but in July/Aug we redeemed some liquidity providers and decided we could operate on $1.5M of liquidity.

Depending on how you calculate the basis, we’re looking at between 4.4% - 5.9% APR for the USDT bonder returns since TGE (5% APR if you assume $1.75M avg liquidity). This is based off annualizing the interest rate earned in the time since TGE.

The other thing to consider is that we’d like to lower the fees for the USDT bonder, so this APR should be lower going forward.

what APY would you deem a fair compensation for bonding an asset like USDT ? If I look at money markets they yield around 2% currently for USDT

The numbers you provided are quite similar numbers to LP organic returns on Hop. So again, I don’t see why bonders should get special treatment for the period since TGE.

As for lowering the fees for the bonder in the future: doesn’t that require more aggressive HOP liq incentives in the future)? Thus we revert to my initial point: don’t retroactively reward bonders while omitting LPers. If needed, increase future bonder liq incentives to enable lower fees.

Excited to see this proposal and grateful to the HOP team and community for including Bonder incentives.

I have been helping Maaria run the USDT bonder and wanted to share my thoughts on the retroactive rewards:

Retroactive rewards would be a signal by the HOP community that they are aligned with Bonders and prepared to sufficiently incentivize them for the long term.